Infighting within the vice president’s party is undermining an already unstable ruling alliance that was formed after a five-year civil war killed 400,000 people. 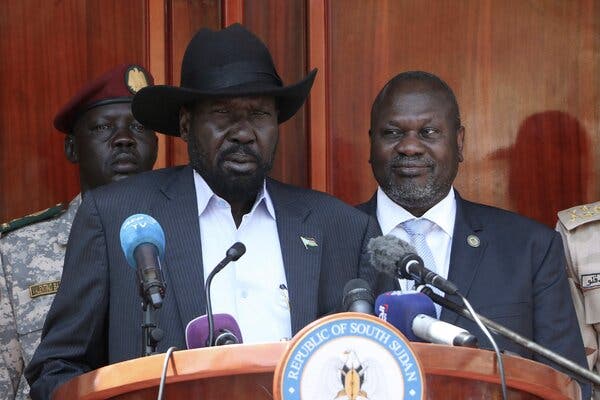 NAIROBI, Kenya — A decade after South Sudan gained independence amid much hope and fanfare, the country’s path to lasting stability remains fragile as infighting tears at the shaky coalition governing the world’s youngest nation.

Over the weekend, clashes within one faction in the national unity government may have left dozens dead, according to officials. The flare-up of violence exposed long-simmering divisions and frustration over the slow implementation of political reforms, and raised concerns about the future of the tenuous peace agreement signed three years ago.

The clashes pose a challenge to a nation already facing a dire humanitarian crisis, growing internal power struggles and the coronavirus pandemic. They demonstrate how violence and armed splinter groups are derailing efforts to chart a path toward a better future and indicate that leaders will face even more difficult challenges as the country’s problems mount.

The fighting erupted early Saturday between rival forces within the military wing of Vice President Riek Machar’s party, the Sudan People’s Liberation Movement in Opposition. The clashes came just days after Mr. Machar’s rivals said they had deposed him as leader of the party and its military forces, part of the fragile alliance that rules the country, and appointed First Lt. Gen. Simon Gatwech Dual as interim leader.

Forces loyal to Mr. Machar “repulsed the aggressors,” who support Mr. Dual, during the fighting in the Upper Nile region in the country’s northeast, according to Col. Lam Paul Gabriel, the military spokesman for Mr. Machar’s party.

Each side claimed they killed more than two dozen fighters from the rival faction, but there was no independent verification of either side’s claims.

On Monday, concerned about the violent confrontations, the Intergovernmental Authority on Development, a regional security and trade bloc that includes Ethiopia, Sudan and Kenya, called for an extraordinary meeting to discuss the escalating situation.

The clashes come a decade after the landlocked nation gained independence from neighboring Sudan — a moment that many hoped would end decades of bloody conflict.

But in 2013, barely two years after the jubilant independence celebrations, tensions between President Salva Kiir, who belongs to the majority Dinka ethnic group, and Mr. Machar, a member of the Nuer ethnic group, blew up into a civil war that claimed the lives of some 400,000 people and displaced nearly four million people.

After almost five years of civil war, the country’s feuding leaders reached an agreement in 2018 and last year, they agreed to form a unity government . Mr. Machar, who had fled the country , was sworn in again as vice president and he and Mr. Kiir promised to build a government that would uphold peace and deal with the country’s major challenges.

But the uneasy alliance has yet to alleviate the country’s biggest economic and political problems.

About 8.3 million people across South Sudan are in need of humanitarian assistance, according to the United Nations , with the lack of infrastructure and violence against humanitarian personnel derailing aid delivery. Early seasonal flooding has also displaced at least 90,000 people in at least two counties in Jonglei state this month, according to the United Nations.

Intercommunal violence is rampant with efforts at disarmament leading to clashes with authorities and dozens of deaths a year ago.

Corruption permeates the economy, and officials have been accused of pocketing earnings from oil, the primary source of the government’s wealth. The coronavirus pandemic has also battered people’s meager incomes and the country has vaccinated barely one percent of its 11 million people.

“The inevitable conclusion is that South Sudan‘s post-independence leaders failed to live up to their commitments and the expectations of South Sudanese citizens,” ​​Luka Biong Deng Kuol, an academic and a former South Sudanese minister, recently wrote in an analysis for the Africa Center for Strategic Studies.

Mr. Machar’s camp has insisted in recent days that he is still very much in charge and that three generals who were involved in calling for the vice president’s dismissal were fired.

Yet the latest events point to how both President Kiir and Mr. Machar face challenges within their own ranks. While Mr. Machar’s camp has tried to replace him in the past , the president has also faced calls to step down

These tensions threaten to pose a serious hurdle as elections loom in the next year or two — authorities postponed the 2022 elections but are yet to commit to a new timeline — and could lead to renewed violence.

To avert a crisis, there has been a growing call for the drafting and passing of a new constitution that would more equally distribute power and ensuring that justice is delivered for the victims of the civil war.

“There is still no sign of a broader reset in South Sudanese politics,” Mr. Boswell said. “Instead, the divisions just keep mounting.”