Demonstrators in different locations across Khartoum and other cities voice their rejection of the military deal reached last month. 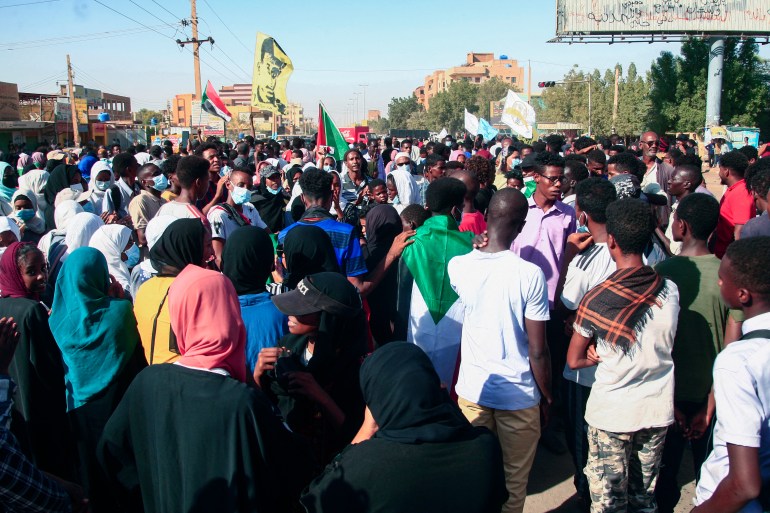 Police have fired tear gas at protesters near the presidential palace in Khartoum as thousands of Sudanese took to the streets on Monday across several cities in the latest demonstration against the October military coup and subsequent deal that reinstated Prime Minister Abdalla Hamdok.

Footage circulated on social media purportedly showed demonstrators marching in different locations in Khartoum and its sister city of Omdurman. There were also protests in other cities, including Kassala, Sennar and Port Sudan.

The messy aftermath of Sudan’s coup

The demonstrators marched from various districts of the capital, many chanting “No to military rule” and “The army might betray you, but the street will never betray you”, according to the AFP news agency.

The Sudanese military seized power on October 25, dissolving the transitional government and arresting dozens of officials and politicians.

The takeover upended a fragile planned transition to democratic rule more than two years after a popular uprising forced the removal of longtime leader Omar al-Bashir.

Hamdok was reinstated last month amid international pressure in a deal that calls for an independent technocratic cabinet under military oversight. The agreement included the release of government officials and politicians detained since the coup.

The deal, however, was rejected by the pro-democracy movement, which insists on handing over power to a civilian government to lead the transition. The protests came under the slogan: “No negotiations, no compromise, no power-sharing [with the military]”.

Security forces have cracked down on the protests since the October coup killing at least 44 protesters and wounding hundreds, according to the Sudan Doctors Committee, which tracks protester deaths.

Monday’s protests were called by the Sudanese Professionals Association and the so-called resistance committees, which spearheaded the uprising against al-Bashir and then the military coup.

‘Legitimacy to the coup’

“Protesters say the deal [signed last month] has given legitimacy to the coup.

“Their main demand has been no compromise and no legitimacy for the takeover in October. The fact that prime minister Abdalla Hamdouk signed that deal is a big betrayal. He was a symbol of civilian rule before the takeover happened,” she said.

Morgan said protests were taking place across several areas outside of the capital, Khartoum.

“It is obvious that there is momentum around the country to show they are angry at the deal and political parties have been voicing their rejection,” the Al Jazeera correspondent said.

Among the protesters’ demands are the restructuring of the military under civilian oversight, purging officers loyal to al-Bashir and disbanding armed groups including the Rapid Support Forces (RSF).

The RSF are a paramilitary unit notorious for atrocities during the Darfur war and a 2019 massacre of protesters in Khartoum. They are led by General Mohammed Hamdan Dagalo, who is also the deputy head of the ruling sovereign council.

Dagalo is seen as the co-architect of the coup along with General Abdel-Fattah Burhan, head of the ruling body.

General al-Burhan on Sunday told Reuters news agency that the army will leave politics after elections that are scheduled for 2023.

“When a government is elected, I don’t think the army, the armed forces, or any of the security forces will participate in politics. This is what we agreed on and this is the natural situation,” al-Burhan told Reuters.