Deaths bring to 76 the number of protesters killed in a crackdown on anti-coup demonstrations, the medics say. 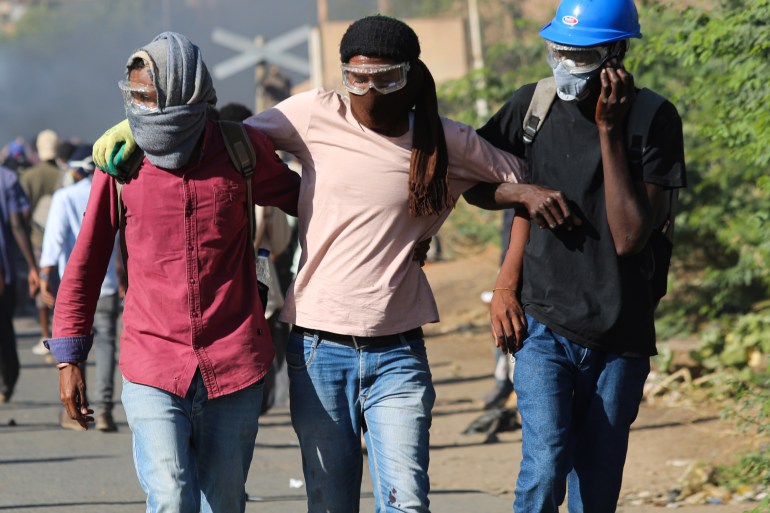 Two protesters were killed on Monday in the capital Khartoum – one was shot in the chest and the other in the head, the Central Committee of Sudan Doctors said. The third was killed in the city of Wad Madani, south of Khartoum, with bullets to the head and the shoulder, the committee said.

Other protesters were injured in the capital Khartoum and the city of Omdurman, they added.

The latest death brings to 76 the number of protesters killed in a crackdown on anti-coup demonstrations, the medics said.

“Our people are protesting peacefully and using all forms of nonviolent resistance towards a free, democratic and just country, only to be confronted by the military with the worst crimes,” the doctors’ group said.

Sudanese security forces also fired tear gas, stun grenades and water cannon spraying red water at protesters on Monday as they attempted to march towards the presidential palace in Khartoum.

In the capital’s twin city of Omdurman, the Reuters news agency reported a heavy security presence and tear gas fired on a main road.

The protests were called by neighbourhood resistance committees, which advocate a stance of “no legitimacy, no negotiation, no partnership” towards the military.

Such protests, along with barricades throughout the capital and a general strike last week, have continued since the military took power on October 25, ending a partnership with civilian political parties since longtime ruler Omar al-Bashir was deposed in 2019.

Some 76 protesters have been killed and more than 2,000 injured in crackdowns on the protests, according to medics aligned with the protest movement, mainly by gunshots and tear gas canisters.

One committee reported the arrest of at least four members, while another said its headquarters were raided.

There were also large protests on Monday in the city of Wad Madani, where witnesses said protesters marched towards the house of a protester killed on Friday before heading to the state government building.

“No, no to military rule,” and “civilian [rule] is the people’s choice” protesters shouted in Wad Madani,  witness Emad Mohamed told the AFP news agency.

Social media users shared images of other protests in the cities of El Fasher, Shendi, and Elobeid.

Last week, the United States condemned the use of force against protesters, saying it would consider additional measures to hold perpetrators of violence accountable.

Sudan’s authorities have repeatedly denied using live ammunition against demonstrators, and insist dozens of security personnel have been wounded during protests.

Military leaders have said that the right to peaceful protest is protected and have commissioned investigations into the bloodshed. The violence has deepened the deadlock between pro-democracy groups and the military leadership.

Al Jazeera’s Hiba Morgan, reporting from Khartoum, said that since the army’s takeover, Sudan’s politics has been in “disarray”.

“Political parties are divided, some have shown support for the takeover saying it was necessary, while others have condemned it, saying that the military has … disrupted the democratic transition [to elections] that was under way,” Morgan said.

But despite the use of force by security personnel, people “continue to voice their anger against the takeover”, Morgan said.

“They say that they will not stop until the military hands power to a complete civilian government and return to the barracks,” she added.

On Sunday, Sudan’s key Umma party pledged “to remove all traces of the coup”.

It, however, warned that the “coup leadership” will “persist with its brutality and come up with new ways to commit violent massacres and launch mass arrests of revolutionaries”.

Hundreds of pro-democracy activists have been arrested in the crackdown on anti-coup activists.

On Saturday, a leading women rights activist Amira Osman was arrested following a raid on her home in Khartoum, according to a statement by the No to Women’s Oppression initiative which she leads.

Other activists from the “resistance committees”, informal groups which have been instrumental in organising anti-coup protests, were also arrested late on Sunday, according to members who requested anonymity fearing reprisals.

On Monday, Abdelghani Alnaeem, former deputy foreign minister under al-Bashir, confirmed that he and more than 100 other diplomats and administrators who had been fired as part of an anti-corruption task force were reinstated by a judge.

“This is a positive step,” he said.