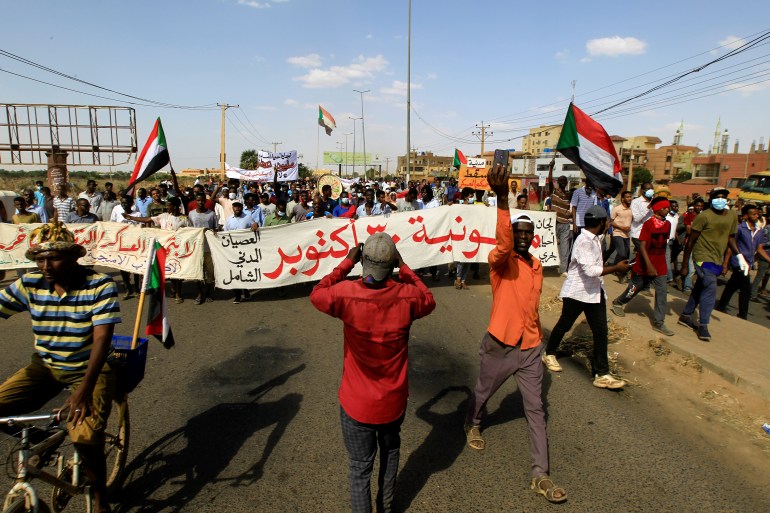 On October 25, Sudan’s military carried out a coup against the civilian authorities. Army chief, General Abdel Fattah al-Burhan, dissolved the government and the sovereignty council, suspended critical parts of Sudan’s Constitutional Charter of 2019, and imposed a nationwide state of emergency, thereby orchestrating the biggest political crisis in Sudan’s two-year-old transition. Prime Minister Abdalla Hamdok and some of his cabinet ministers were arrested. Al-Burhan then declared the military would establish a new government, promising elections would take place in July 2023.

On October 30, tens of thousands of Sudanese people turned out across Sudan in a well-coordinated demonstration against the coup. Live ammunition was fired at protesters and at least three people were killed and more than 100 wounded.

KEEP READING
Sudan court orders end to internet shutdown
Al-Burhan: ‘I will have no political role’ after power handover
Scramble for evidence after attack in northwestern Myanmar
Iran holds large-scale military drill after US navy confrontation

Since then, protests have continued in response to calls by the Sudanese Professionals Association (SPA) for civil disobedience against the military coup. This has demonstrated the resilience and passion of the Sudanese people to preserve the democratic transition and their ability to mobilise across the country.

Amid the multiple mediation efforts underway in Khartoum, three possible scenarios emerge for what happens next. Which one plays out will be determined by whether all actors involved – the military, the Forces for Freedom and Change (FFC), which emerged as the leading civilian political power after the 2019 revolution, and the protesters – are ready to bear the high cost of confrontation or are willing to make compromises.

The first scenario is to continue down the path which the military set out and normalise the coup. This would mean that the Sudanese people would have to accept a political arrangement that they suffered under for 30 years and buy into the argument that the army’s move against the civilian government was in the best interest of the country.

However, it is unlikely that the Sudanese youth, who continue to protest, neighbourhood resistance committees, which have led mobilisation since the 2019 revolution, major civil forces, such as the Sudanese Professional Association (SPA), or the FFC itself would be willing to back down from their demands for a return to civilian rule. This would effectively put them in direct confrontation with the military, as they would have to mobilise again to fight for democracy. As a result, they would have to pay a very high price, perhaps too high, as many lives may be lost in clashes with the security forces.

An escalation between the military and civilian forces could throw the country into political and economic paralysis and undo all progress made to normalise relations with the international community and international financial institutions. The US has already suspended $700m in economic assistance after the coup and billions of dollars in debt relief could be on the line. Top military officials could also face targeted sanctions by the US and other Western countries.

The second scenario is simply to reverse the coup and return to the status quo before October 25. This would mean bringing back into effect the Constitutional Charter of 2019, which was agreed upon between the army and the FFC, and restoring both the sovereignty council and the government. Both the protesters and the military would oppose such a development.

For the Sudanese people who took to the streets, going back to the political arrangements before the coup would mean that the political tensions which led to it in the first place would not be addressed. This includes the transfer of the chairmanship of the sovereignty council to civilians and the removal of any executive powers for the military. The mass protests of the past two weeks have demonstrated that the Sudanese people want civilian governance.

For the military, going back to the pre-coup arrangements would mean admitting that what happened was a coup and that its leadership cannot be trusted. This could expose al-Burhan and the generals who supported him to legal prosecution and could threaten their powers.

A third scenario would see all stakeholders involved agree on a peaceful political settlement. This would require concessions from all parties and would entail restoring the Constitutional Charter of 2019, with the necessary adjustments to the power-sharing arrangement to ensure that the political tensions are mitigated. The sovereignty council and the civilian government would have to be restored as well.

While a political settlement could take different forms, reflecting the mediation efforts, in my view a number of steps would have to be taken to ensure its durability.

First, the settlement should provide for the civilian takeover of the country’s governance. A new government under Prime Minister Hamdok’s leadership should be formed without any interference from the military or other parties. The sovereignty council should be reconstituted and downsized. Current civilian and military members, including al-Burhan and General Mohamed Hamdan Dagalo, a.k.a. “Hemedti”, the commander of the notorious paramilitary Rapid Support Forces, should resign to make way for a new all-civilian membership, that would inspire confidence in the general public.

The loss of control over executive power would, of course, worry the army’s leadership, so it would have to be given political guarantees. For al-Burhan and Hemedti, in particular, to exit Sudanese politics, they would have to be granted immunity from prosecution for criminal offences committed in the past. This may be the only way to put an end to the military’s meddling in the political transition.

Apart from the military and the civilian political powers, represented by the FFC, the demands of two other important stakeholders will have to be taken into account: the various armed factions, which signed the Juba Peace Agreements with the transitional government in 2020, and the protesters and mobilised civil groups.

Some of these armed factions, who felt alienated by the direction which the political transition was taking in Sudan, joined the military in the build-up to the coup, participating in pro-military protests that were calling for the dissolution of the government. Any viable settlement would have to respect the power-sharing provisions of the Juba Peace Agreements and seek to convince these groups that their interest lies in the establishment of civilian rule, not military rule.

The demands of the Sudanese people who took to the streets and the civil groups that supported them also have to be taken into account. The SPA and resistance committees have been calling for nothing less than absolute civilian control of the transition going forward and do not see any political role for the military, especially after the coup. If their concerns are not addressed, there is a risk that the settlement would not be well received by the general population and these groups would mobilise against it.

This scenario may be challenging to implement, but it appears, in my view, to be the most reasonable one, which could spare the country from political and economic disaster.

Historically, one of the main challenges for the Sudanese people has not been overcoming dictatorships or repressive regimes, but rather consolidating democracy once regime change has been attained. Establishing democratic traditions and institutions to protect the achievements of political freedom and plurality has been elusive. The current crisis offers an opportunity to correct the historical record and establish a durable democratic regime in Sudan.

The views expressed in this article are the author’s own and do not necessarily reflect Al Jazeera’s editorial stance.