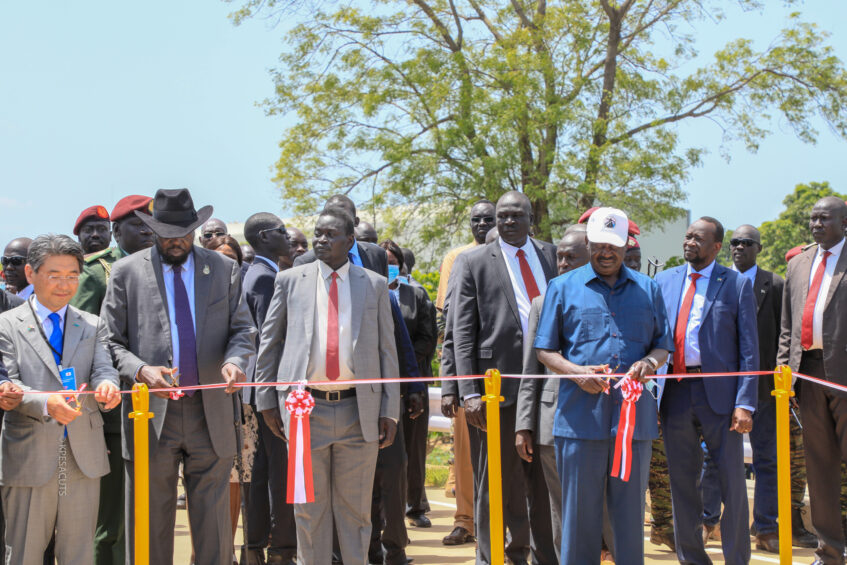 President Salva Kiir has said the Freedom bridge will stand as a symbol of true friendship with the people of Japan.

The President has officially opened the lifeline Freedom Bridge in Juba Thursday morning.

The bridge, believed will ease traffic in Juba city, was handed over to the government by the Japan International Cooperation Agency this morning.

Thousands of Juba residents turned up for the commissioning of the bridge.

Speaking during the opening of the Freedom Bridge, President Kiir says the bridge is a symbol of friendship with people of Japanese.

“I would like to thank the government and the people of Japan for this important gift for the people of South Sudan. This bridge will stand as the lastly evidence of our true friendship with the Japanese people and their government,” Kiir said.

“Your excellency, the ambassador of Japan, your country is one of the few countries that do not attach conditions to it. We appreciate this development support,

For his part, the African Union’s High Representative for Infrastructure Development in Africa, Raila Amollo Odinga says the Freedom bridge will resolve the transport disruption and trade interruption to South Sudanese people and the people of East Africa.

“Every bridge built, is a relationship established. Freedom bridge will resolve fast the transport disruption and trade interruption to the people of South Sudan people and the people of East Africa,”
“
With this bridge, South Sudanese will need to access the port of Mombasa or Lamu Just like Kenyan and Ugandan traders need to access Juba. This bridge is part of the answers for the quest of our traders,” Odinga said.

Odinga, who is also one of Kenyan presidential candidates, his role at African Union is to guide the vision, policies, strategies and a programme for the development of priority regional and continental infrastructure in transport, energy, trans-boundary water and ICT.

“Dear South Sudanese Friends, now the Freedom Bridge is in your hands. Please take good care of it. It will work hard for you. It is laying itself down for you like a bridge over the troubled water. This bride is the simple out of our true friendship,” Japanese Ambassador said.

This bridge will be the major link in South Sudan with a total length of 560m, a width of 12.9m, access roads on both sides making a total of 3700m, and a sidewalk.

The project was conceived before the independence of South Sudan in 2011.

The construction of the bridge started in 2013.

However, the outbreak of conflict that same year prevented its progress.

However, when renewed conflict erupted in 2016, Japanese aid workers were evacuated from South Sudan and suspended the construction of the Freedom Bridge.

In 2019, after resumption of the construction, due to the COVID-19 pandemic, Japanese engineers working on the bridge were again evacuated, putting another halt to the construction.

The initial estimated cost of the construction was $91 million but in 2019, the government of Japan pledged an additional $28 million for the completion of the bridge

The bridge will open for citizens of South Sudan and the East African Community a wealth of new possibilities and for a future marked by increased connectivity.