The surprise announcement by Gen. Abdel Fattah al-Burhan, the leader of Sudan’s coup government, that the military is willing to hand power back to civilians presents an opportunity to get the democratic transition back on track. 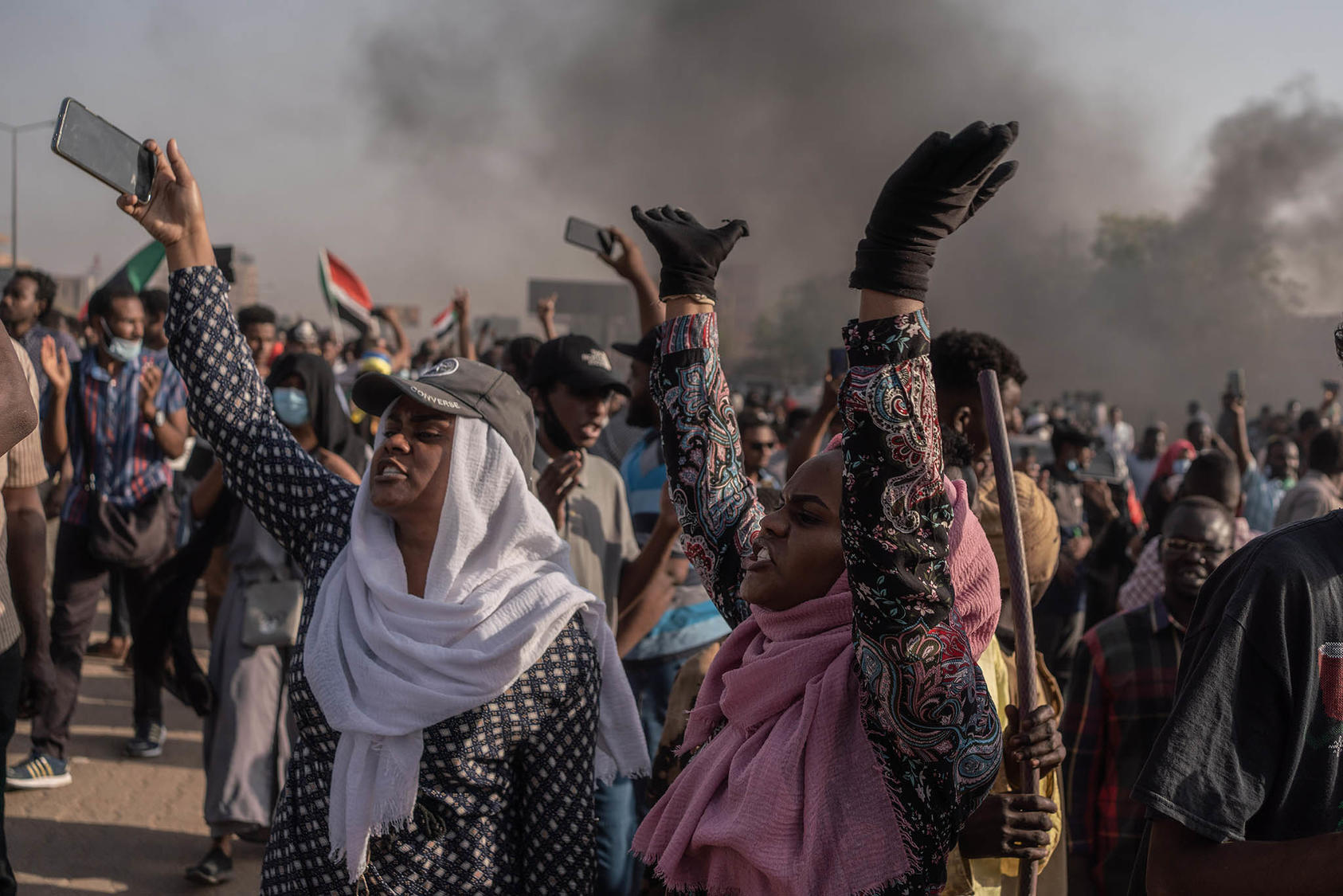 Demonstrators in Khartoum, Sudan mark the third anniversary of autocrat Omar al-Bashir’s ouster, April 6, 2022. Over the last eight months, at least 111 Sudanese have been killed in a military crackdown on protests. (Abdulmonam Eassa/The New York Times).

n a televised address on July 4, Burhan said the military will step aside once political and revolutionary forces reach an agreement on a new technocratic government. The announcement comes amid a deepening economic crisis, the military’s inability to form a new government and large-scale and deadly protests demanding a return to civilian rule.

Burhan’s announcement left unclear several critical details. The power and reach of the proposed military council, for example, need to be clarified. The role of the armed groups that signed the Juba Peace Agreement will need to be elaborated. Guarantees that the military will not interfere in civilian-led efforts to form a new government and positive steps to demonstrate its commitment will also likely be required, along with commitments to address much-needed security sector reform. After the military ousted the transitional government in October 2021, it suspended the constitution and arrested government ministers, including Prime Minister Abdalla Hamdok.

While many are skeptical about the military’s sincerity to hand power back to civilians — indeed, leading political forces have rejected Burhan’s statement and called for an escalation of protests — Burhan’s address presents an opening to catalyze ongoing political dialogue, organizing and nonviolent mobilization. Ultimately, Sudanese must agree on the path forward for their hard-won revolution, including the future role of the military. At the same time, international partners — including the United States as a bilateral partner and leader in the United Nations — must seize the moment to restore Sudan’s political transition.

Compounding Costs of the Coup

When the military seized power in October 2021, it argued that the civilian government was too divided to manage the security threats facing Sudan. Burhan further justified the military’s actions as protecting the goals of the revolution, which resulted in the ouster of longtime leader Omar al-Bashir in 2019, and sustaining its progress.

Today, the costs of the coup continue to compound. Sudanese face security, economic, humanitarian and political crises worse than eight months ago and arguably worse than before Bashir’s ouster. The price of fuel, bread and basic commodities continues to rise while inflation means that it is harder for Sudanese to make ends meet. Many companies that import and export basic commodities have collapsed under the economic pressure. Combined with global food shortages resulting from Russia’s war in Ukraine, food prices are expected to continue to increase in the coming weeks and months.

Negotiating a pathway for relief for Sudan’s $56 billion debt was a critical achievement of Hamdok’s civilian government. An agreement signed in July 2021 with the Paris Club, a group of officials from major creditor countries whose role is to find coordinated and sustainable solutions to the payment difficulties experienced by countries in debt, outlined steps as part of the “Enhanced Initiative for Heavily Indebted Poor Countries.” In June, the Paris Club reported the suspension of progress toward the implementation of Sudan’s debt relief due to the fact that the military had ousted the transitional government. Servicing debt payments remains a debilitating weight on Sudan’s economy. With debt relief paused, Sudan is also cut off from new sources of financing and development assistance that would open once relations are normalized with international financial institutions (while many other development partners, including the United States, have suspended aid because of the military coup).

Besides the economic pain, Sudanese are paying the ultimate cost as hundreds have died in anti-military protests. Peaceful protests have been met with violent suppression and lethal force by security forces. On June 30, eight people were killed, hundreds injured and many more detained during anti-coup protests. The Sudan Doctors Committee has documented the killing of 111 Sudanese — many of them under the age of 30 — in protests over the past eight months. A surge in violence in Darfur following the coup has led to hundreds of deaths and displaced well over 100,000 people in the western part of Sudan.

Sustained Pressure from the Streets

Even in the face of violent repression, Sudanese citizens protest on a weekly basis to demand an end to military rule. The large-scale protests on June 30 demonstrated the continued commitment and energy of the protest movement. With internet cut and bridges into Khartoum blocked with large shipping containers, the organization, creativity and adaptability of the protest movement was on full display. Sit-ins have been held at various places around Khartoum and continue around the clock. Equally striking is the fact that protests are being held in cities beyond the capital.

Research has documented how the protest movement is underpinned by a community-based structure of neighborhood committees and initiatives, a deliberate set of organizing structures and a deep commitment to nonviolence. The resistance committees were established during the 2019 revolution, sustained through the early phase of the political transition and have become a center for organizing Sudanese citizens’ demands for political leadership that is accountable to them. Training on nonviolence, civic engagement and organizing continues to deepen the capacity of the movement. Discussions within and between the committees, many of which are led by youth, have produced charters outlining citizens’ expectations of any new transitional government and its leadership. Any new political settlement negotiated between the military and political forces will have to be accepted by and enjoy the support of the street, including the resistance committees.

International partners have put their support behind the tripartite mechanism, which is jointly led by the African Union (AU), the Intergovernmental Authority on Development (IGAD) (the eight-state regional block in East Africa and the Horn) and the U.N. Integrated Transition Assistance Mission in Sudan (UNITAMS). Building off political consultations launched by UNITAMS in January 2022, the tripartite mechanism held further discussions from March until May and convened a first meeting in early June.

In many respects, the June meeting failed and the process stalled. Key political forces, including resistance committees and the Forces of Freedom and Change (FFC), the coalition that signed the power-sharing agreement with the military in 2019, rejected the approach to first unify civilians before negotiating with the military and boycotted the meeting. Concerns were also raised about the format that included political forces that had backed the military takeover in 2021 and those that were ousted in the revolution in 2019. The FFC and resistance committees further rejected the premise of redesigning the transition process and opening foundational issues, rather than focusing squarely on ending the coup.

Today, the trilateral mechanism needs a renewed strategy to incorporate the lessons learned in June, respond to the momentum of the last week and address Burhan’s announcement that the military has withdrawn from the political process. A renewed strategy needs to be anchored in a shared understanding of the approach required to end the political, economic, humanitarian and security crises in Sudan. It needs to draw on and activate the strengths of respective institutions, including the AU. And, the strategy needs to incorporate complementary, bilateral initiatives, such as the June meeting convened jointly by the United States and Saudi Arabia in Khartoum that brought together the FFC and military for the first time since the October 2021 coup.

What Should the United States Prioritize?