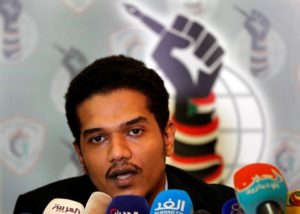 Mohamed Nagi Alassam is a 28-year-old medical doctor who helped lead the longest doctors’ strike in history during the Sudanese revolution, which continued until the fall of Omar Al-Bashir’s regime. Alassam then became the spokesperson and member of the executive committee of the Sudanese Professionals Association (SPA), which played a pivotal role in mobilizing and organizing the public in Sudan in a peaceful revolution. He was arrested on January 4, 2019, after becoming the first member of the SPA to come out publicly. He was released after 98 days in prison. After his release, he represented the SPA in the civilian-military internationally-mediated negotiation process leading to the transitional constitutional document paving the way for a power-sharing agreement.