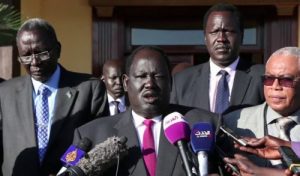 Last week, Juba announced a mediation to reunite the two factions of the Sudan Liberation Movement-North (SPLM-N) and narrow the gaps between them and Khartoum in an effort to facilitate a peaceful settlement for the conflict in the Two Areas which border South Sudan.

But on Monday Presidential Adviser Tut Kew Gatluak announced that all the armed opposition groups in Darfur are also invited to Juba for discussions with the Sudanese government in a bid to reach a comprehensive peace agreement in Sudan.

«President Kiir has invited all the Sudanese armed opposition groups, whether in Darfur or in the two states of the Blue Nile and South Kordofan states, to participate in the (peace) talks in Juba,» he told reporters on Monday.

Gatluak who chaired his government delegation for the Khartoum peace talks further stated that all the Sudanese groups welcomed the mediation of President Kiir between them and the Sudanese government.

«Next week, the Sudanese government delegation and the opposition negotiating teams will gather in Juba in order to begin peace talks,» he added.

President Omer al-Bashir, in the past, refused a proposal Kiir had made to mediate between the government and the rebels in the Two Areas. However, the relationship between men has been strengthened during the three months of talks between the South Sudanese warring parties.

The Juba process for peace in Sudan will tackle all the outstanding issues in the African Union-brokered process to end the conflict in the Two Areas. The same for the armed groups Darfur which had failed to conclude a humanitarian ceasefire agreement in Addis Ababa before to move for the political talks in Doha.

In Khartoum, the ruling National Congress Party (NCP) welcomed the South Sudanese mediation and recalled the benchmarks for peace in Sudan.

The Head of NCP Information Sector, Ibrahim Siddiq Ali, said in a statement issued in Khartoum that the point of reference for the Two Areas is the African Union High-Level Implementation Panel (AUHIP), the Doha Document for Peace in Darfur (DDPD) includes the benchmarks for the talks with the armed groups in western Sudan.

He also underscored that the dialogue with the political opposition remains governed by the National Document and the recommendation of the National Dialogue Conference.

The SPLM-N Agar welcomed the inclusion of Darfur groups in the Juba process and praised once again the initiative of President Salva Kiir to bring to Juba the SPLM-N factions and the Sudanese government to discuss peace in Sudan.

«The initiative of President Salva Kiir will support the efforts of the African Union and the international community and will pave the way for a comprehensive solution to the whole Sudanese issue,» Yasir Arman told Sudan Tribune from Juba.

Arman stressed that the South Sudanese mediation between the Sudanese parties is a good opportunity in light of regional changes, including the peace agreement in South Sudan.

«This initiative supports the conclusion of a comprehensive and lasting solution between the Sudanese parties and it should include all the factions of the Sudanese opposition,» said Arman.

The presence of the armed groups from South Kordofan and Blue Nile states and Darfur region along the border area between the two countries and inside South Sudan caused many problems between Juba and Khartoum in the past.

In a speech before the United Nations General Assembly on 28 September 2018, the South Sudanese First Vice-President Taban Deng Gai called on Khartoum to negotiate a peaceful settlement of its conflicts in Darfur and the Two Areas, saying these conflicts affect stability in South Sudan and the whole region.

The 2015 peace agreement between Juba and the armed opposition groups included an article providing to disarmed, demobilized and repatriated the Sudanese armed groups present in the country.