Governor says situation after days of violence is now ‘relatively stable’, adding there is ‘looting’ but ‘no more fighting. 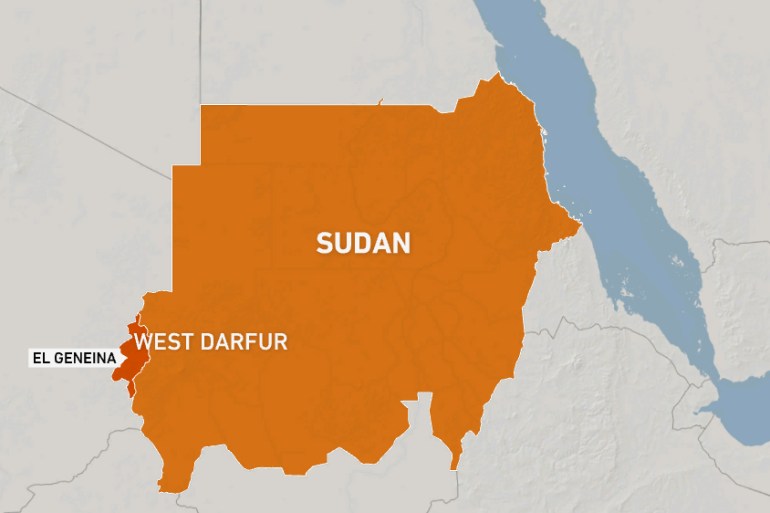 Members of the Massalit and Arab communities have fought since Saturday in and around the state capital El Geneina, trading gunfire and shelling. Sudan’s government has declared a state of emergency in the region.

“According to medical reports, the number of dead is now 132,” Mohamed Abdallah Douma, the governor of the region bordering Chad, told a news conference in Sudan’s capital, Khartoum.

“The situation is now relatively stable,” he said, adding that there was “looting” but “no more fighting”.

His comments came a day after the Sudanese doctors’ committee in West Darfur said it had counted at least 37 more fatalities on Wednesday, bringing the number of people killed since Saturday to 87.

The bout of fighting is the latest in a series of deadly clashes as security has deteriorated across Darfur in 2019 and this year.

This recent flare-up grew out of a shooting that killed two people from the non-Arab Masalit tribe in a camp for displaced people in El Geneina, according to the United Nations humanitarian affairs agency.

Fighting ensued between the Arab Rizeigat and the Masalit tribes, with both mobilising armed men.

The unrest poses a challenge to efforts by Sudan’s transitional government to end decades-long rebellions in areas such as Darfur, where conflict often falls along ethnic lines.

The clashes forced the UN to suspend all humanitarian activities in El Geneina, which serves as a hub for aid delivery to the conflict-wrecked region.

The world body said its decision would affect more than 700,000 people.

The vast Darfur region was ravaged by a civil war that erupted in 2003, leaving some 300,000 people dead and 2.5 million displaced, according to the UN.

The war began when ethnic minority rebels rose up against longtime ruler Omar al-Bashir’s Arab-dominated government. Khartoum responded by unleashing government-linked militia that called themselves the Popular Defence Forces, but was known as “Janjaweed” by the rebels, recruited from among the region’s nomadic tribes.

The conflict has subsided across the years, and the latest in a string of peace deals was agreed in October. But after years of conflict, the region is awash with automatic weapons and clashes still break out, often over land and access to water.

Sudan is in the middle of a rocky transition following the overthrow of al-Bashir in April 2019 in the wake of mass protests against his rule.

The transitional military-civilian authorities have pushed to build peace with rebel groups in Sudan’s main conflict zones, including Darfur.