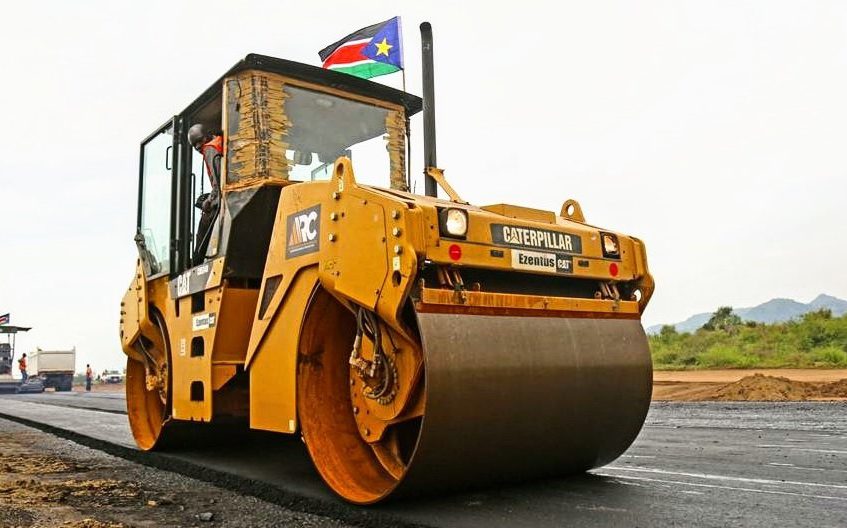 Bildetekst: ARC builds the Juba-Bor Road. Its head, Benjamin Bol Mel, established it after the US imposed sanctions on him over grand corruption in the country | Credit | ARC.

Two blacklisted businessmen closed to President Salva Kiir are still running businesses worth billions of US dollars, report has shown.

They are Benjamin Bol Mel and Kur Ajing – who are engaged in road construction and importation of military supplies, respectively.

In December 2017, Bol Mel and two companies in his vast corporate network, ABMC and Home and Away LTD, were designated by the US for their involvement in corruption in South Sudan.

“It appears to be an open secret in South Sudan that ARC is controlled by Bol Mel, and he is referred to in numerous press reports on ARC’s receipt of special tax exemptions and other contracts,” partly reads the report, citing various authenticated documents.

The report says Bol Mel’s companies have been awarded road construction and other infrastructure project contracts worth at least $3.5 billion, including the construction of the Bor-Juba road.

These contracts are oil-backed, but awarded in clear violation of the 2018 Public Procurement Act.

Meanwhile, in October 2019, the Whitehouse imposed sanctions on Ajing and one of his companies, Lou Trading and Investment Company Limited, for “involvement in bribery, kickbacks and procurement fraud with senior government officials in South Sudan.

Barely a month after he was blacklisted, Ajing reportedly established Amuk for Trading and Investment under his wife Christine Achol Akot.

“Within a few months, South Sudan’s Ministry of Defense began to award the newly established Amuk contracts totaling more than a billion US dollars to supply the country’s military with food, including a $539.4 million contract in March 2020 and a $644 million contract in September 2020,” it continues.

On recommendations, The Sentry says the US Treasury Department should investigate and, if appropriate, impose sanctions on the individuals and entities named in this report.

It also called upon the US to amend the South Sudan and Global Magnitsky Executive Orders to include a provision concerning immediate family members of sanctioned individuals.