UN says more than two-thirds of population are in need of humanitarian assistance. 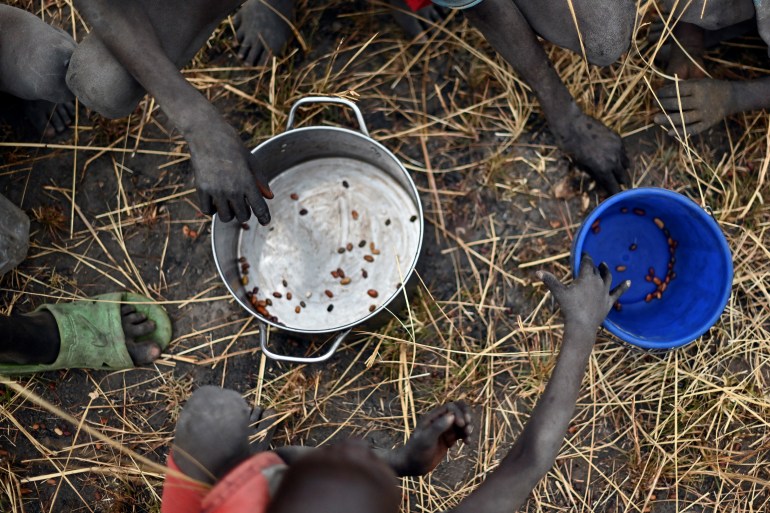 Armed clashes, floods and drought in South Sudan have left more the 7.7 million people – some 63 percent of the population – facing a food crisis.

The United Nations and South Sudan government said on Saturday that extreme weather conditions, increased armed violence, and the number of internally displaced people have led to increased food insecurity, which had worsened since last year.

“We will continue to have the situation we have in South Sudan if we don’t start to make that transition to ensuring peace at the community levels,” UN Humanitarian Coordinator in South Sudan Sara Beysolow Nyanti said.

Populations suffering most from the food shortages are located in the Unity, Jonglei, Upper Nile, Warrap, and Eastern Equatorial states, according to a joint UN and government report.

“Until conflict is addressed, we will continue to see these numbers increase because what it means is that people do not have safe access to their lands to cultivate,” said Adeyinka Badejo, World Food Programme acting country director in South Sudan.

“We appeal to the leaders of the country to continue towards the path of peace.”

Despite the agreement, fresh fighting erupted on Friday between government and opposition forces in oil-rich Unity State.

Though signing on to a peace deal in 2018 that ended five years of civil war, and forming a unity government two years ago, clashes between Kiir and Machar’s opposing sides have continued amid disagreement about how they would share power.

South Sudan has suffered continuing instability since independence in 2011. Both leaders have been criticised by the UN for their role in the violence, as well as for stifling political freedoms and plundering national coffers.

The conflict has cost almost 400,000 lives and uprooted millions from their homes.

Last month, the UN launched an international appeal for South Sudan to raise $1.7bn in aid needed to provide urgent, life-saving assistance to help millions through 2022. More than two-thirds of the population – almost nine million people – are in need of humanitarian assistance, the UN said.