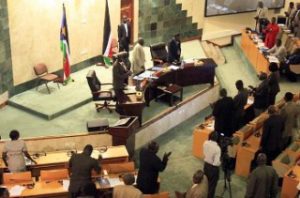 South Sudanese MPs stand during a parliamentary session in Juba on August 31, 2011 where the ruling party used its huge majority to approve a new cabinet over opposition objections that the number of ministers was beyond the means of the world’s newest nation. AFP PHOTO/STR (Photo credit should read -/AFP/Getty Images)

A South Sudanese religious leader has asked members of parliament and cabinet ministers to stay close to the people so that they are able to understand their challenges and the needs.

“People are living like abandoned orphans because of members of parliament don’t find time to stay in their constituencies,» said episcopal Bishop of Akot diocese, Isaac Dhieu.

“There is a gap between the grassroots and leaders because leaders are not among the people. The focus this time should in the community where change is supposed to start from. Change does not start with the president; change starts with the grassroots and it is the reason why MPs run away and go for positions of minister, deputy minister and abandon the people like the way they are [doing] right now”, he added.

“Everyone who failed in the government is running to the SPLM-IO, so what kind of change are we crying for? Every day you are crying but there’s no one to listen to you. People are being attacked at night by the unknown gunmen because there’s no leadership to protect them. I know people know people who are more than capable to deliver services to the people but they have been given the opportunity to serve,» said Dhieu.

People should be allowed to remove garbage in their constituencies and ensure each household has clean and running water on prepaid basis. They will provide basic needs for all the people and help people have title deeds and own decent shelter”, he added.