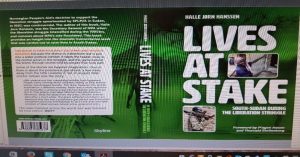 The Norwegian SKYLINE Publishers and the author, in cooperation with Article 19, Reginal Office, EAST AFRICA, the Norwegian Support Group for Peace in Sudan and South Sudan and the Norwegian Solidarity Council for Africa, have the pleasure to invite you and representatives of your media house/civil society organization to the launch of the book «LIVES AT STAKE. South Sudan during the Liberation Struggle» by Halle Jorn Hanssen, a former Secretary General of Norwegian People’s Aid. The book is an extended and updated edition of the Norwegian edition from 2015, that in the main dealt with the role of Norwegian People’s Aid during the Liberation Struggle in South Sudan from 1983 to 2005. The English edition includes the author’s view on events in South Sudan from the summer of 2013 until the present.

LIVES AT STAKE is translated by Renee Hilda Waara with support from NORLA, Norwegian Literature Abroad.

John Gachie, the Kenyan editor and writer will be in charge of the programme.

Halle Jorn Hanssen, the author, will introduce the book and give the background for his writing.

Light refreshments to be served.