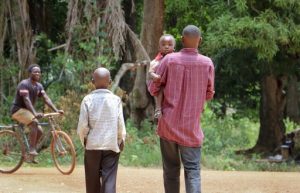 YAMBIO, South Sudan (AP) — Tracing his fingers over his bald head, the 11-year-old boy shifts uncomfortably in his chair. «I’m scared,» James Seferino says. «All I know is that if I don’t take my pills I’ll die.»

The boy’s mother died of AIDS several years ago because she didn’t know where to get help, said the boy’s father, Andrea Seferino, who also is HIV-positive.

South Sudan‘s five-year civil war is quietly creating another kind of victim: those prevented from getting life-saving antiretroviral medicine. Experts say the number of affected people could be in the hundreds of thousands.

Currently just 13 percent of the estimated 200,000 South Sudanese living with HIV are being treated, according to UNAIDS. That compares to 42 percent of people in neighboring Congo, another impoverished country that has long faced instability.

Unless South Sudan‘s fighting stops it could take decades to turn the tide and decrease the number of new annual cases, the best measure of whether a country has the disease under control, according to the U.S. Embassy. The United States is the largest donor to South Sudan‘s HIV programs at about $20 million a year.

Although South Sudan‘s 2.7 percent HIV prevalence isn’t notably high for sub-Saharan Africa when compared to countries like Swaziland, whose prevalence is at 27 percent according to UNAIDS, concerns are rising that the civil war has made accurate tracking of the disease impossible. Local aid groups think the country’s HIV prevalence is likely higher, citing a recent increase in people testing positive due to widespread transactional sex by women trying to support themselves and families and mass rape by armed men, especially in the capital, Juba.

At the same time, the conflict has sent millions fleeing while sexual violence rises as a weapon of war, according to human rights groups.

«The army are the ones raping. They’re the ones with the guns,» said Evelyn Letio, director of the National Empowerment of Positive Women United, a local group supporting women with HIV. Both sides in the civil war have been accused of abuses including rape.

Some of the rape survivors Letio counsels have told her that the soldiers knew the women were HIV-positive but didn’t care. It appeared their main worry was being killed in the current conflict, not HIV killing them 10 years from now.

«This is the first time for me to hear of victims who have been infected with HIV from the army,» army spokesman Lul Ruai Koang told the AP, saying he has heard of «isolated cases» of soldiers being accused of rape.

The U.S. since 2006 has funded a program aimed at testing and treating South Sudan‘s soldiers for HIV. Despite those efforts, the army’s HIV prevalence remains higher than the national one. In 2012, the latest that data was available, it was 5 percent or twice that of the general population. The goal is to scale up the program, which currently reaches only two of the army’s 22 battalions.

In an attempt to reach people displaced by the fighting, at least one aid group has started bringing HIV treatment to some of South Sudan‘s most vulnerable people. Doctors Without Borders three years ago launched the country’s first mobile test-and-treat clinic in Yambio, a town near the Congo border that has South Sudan‘s highest prevalence of HIV.

«We’ve been able to reach people who weren’t able to travel to Yambio either for fear or distance,» said program supervisor Buai Tut. The civil war has forced many families to flee into the bush and farther away from access to care, he said.

The project so far has tested almost 15,000 people and treated over 400 in Yambio County. At least 1,000 more people in hard-to-reach areas are still in need of assistance, Tut estimated.

Separately, South Sudan‘s government has created cards that state the type of HIV medication and status of the disease so that displaced people can easily continue treatment at other clinics.

«When you run away you can go with it and if you go to a refugee camp they’ll know what you’re taking,» Victoria Achut, HIV program manager at the ministry of health, told the AP.

A rare person speaking out is 41-year-old Elizabeth Taban, who for years didn’t tell anyone she was HIV-positive after her husband gave her the disease.

«I didn’t want them pointing the finger,» she said.

Now the Juba resident is working to raise the profile of people living with HIV. Many are still in the dark, either carrying the disease and not knowing it or knowing and not caring, she said.

Marlene Freet knows but can do little about it. The 28-year-old in Juba said the worsening economy caused by the civil war makes it hard to find the food she needs to take with her HIV medication.

Sometimes she eats once a day, the mother of seven children said, adding it is not enough.