From both the government and opposition’s perspectives, there are logical – if self-interested – reasons for rejecting the recent proposals. 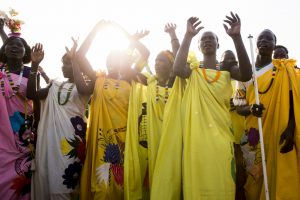 Attempts to forge a peace deal in South Sudan continue to fail, one after another. As the war drags on, yet another effort to bring it to an end have has fallen flat in the past few days – though one-on-one talks have reconvened in Khartoum.

Many commentators have attributed these failures to the pure obstinacy of South Sudan’s leaders who continue to negotiate as the toll of death, displacement and misery rises. But this argument only gets us so far. Looked at from the warring parties’ perspectives, there is a clear – if self-interested – logic to why they keep refusing to sign.

It is only by understanding these reasonings that we can move beyond an endless cycle of failed peace deals.

When the Sudan People’s Liberation Movement-in-Opposition’s (SPLM-IO) spokesperson Mabior Garang rejected a peace deal this May, the main reason he gave was that it awarded the government too much power. The amended deal opposed this week was not deemed to be sufficiently different.

Under the latest arrangement, the government would have been awarded 55% of “responsibilities” and state governors; the SPLM-IO would have got 25% of each; and the remaining 20% would have gone to other opposition parties. Garang claimed this set-up would effectively give the government full control and would be “more like a surrender”.

Along with these disagreements, opposition parties were also reluctant to sign because of an underlying lack of trust. For the SPLM-IO, led by former vice president Riek Machar, there is a high risk of returning to the capital Juba, especially with relatively low levels of influence. Rebel leaders who have been actively targeted by the government’s counter-insurgency efforts are legitimately concerned about their security. Meanwhile, the government would not be able to accept the opposition re-entering the capital fully armed.

President Salva Kiir’s tendency to make unpredictable decisions unilaterally has also eroded trust. Offers of re-integration are therefore met with wariness by both the opposition’s leaders and their rank and file.

“We shall never be part of a deal that carries the seeds of its own failure because that failure costs lives, resources and disrupting social fabric,” said the South Sudan Opposition Alliance (SSOA).

In theory, international actors could make up for some of this deficit in trust. But so far, the regional body IGAD, the United Nations, and the so-called Troika countries (US, UK and Norway) have all failed to provide credible assurances or effectively build confidence.

What this all means is that for the opposition, the risks contained in the agreements outweigh the incentives. Even if some individual opposition figures are offered attractive positions, they know that the power-sharing agreement could collapse once the financial resources supporting it dry up; it remains a question if there are even sufficient resources to support the kind of large expansion of government being proposed to begin with. Moreover, they are aware that accepting an unpopular deal could lead to retaliation from their support bases, leaving them isolated in Juba.

According to these calculations, it is understandable that the SPLM-IO would decide that prolonging the war and upsetting international mediators – even at risk of sanction – is the preferable option.

South Sudan’s government also rejected the latest deal despite indicating it was satisfied with the proposed distribution of power. This too was for a number of reasons.

Firstly, the ruling SPLM is aware that rapidly expanding the government and military to include opposition members would stretch already heavily strained resources. South Sudan’s economic crisis precludes any government from offering the kinds of expansive incentives on which the peace deal is based. Major international partners of the peace process, most significantly the US, have indicated they will continue to reduce aid. And President Salva Kiir recently announced that the government is effectively bankrupt already.

Those in power are wary of agreeing to a deal they know they cannot afford. The inability to uphold such deals in the past has led to their breakdown and only triggered further rebellions. Time and again in South Sudan’s short history, rebels have been integrated only to defect again when the resources run out. Like the opposition, the government is also distrustful of the integrity or reliability of their would-be partners.

Another key reason for the government’s reluctance to resolve a new deal is its recent success on the battlefield. It has regained control of most of the country and there has been a notable reduction in clashes with the opposition over the past eight months. Reported escalations of fighting have tended to relate to smaller groups looking to be included in talks.

According to the ACLED conflict analysis programme: “Following the signing of the Cessation of Hostilities Agreement on 21 December 2017, conflict activity in South Sudan has reduced. This period in South Sudan corresponds the dry season, when the conflict is usually expected to resume, however, the totals of monthly fatalities since the agreement have remained significantly lower than in the same period last year.” The government has noted this weakness as well as the main opposition’s continued fragmentation. A large group recently defected to the government under the leadership of former opposition figure Taban Deng Gai.

For the government then, the situation in South Sudan is not a stalemate. Instead, many believe that they can win the war. This reduces their willingness to sign a peace deal that would require them to relinquish some of their power unnecessarily.

What this means is that, for the government, the only real incentive or pressure to agree to a peace deal is to satisfy the international community. However, the experience of being targeted by punitive international sanctions and increasingly aggressive rhetoric by mediators has made some leaders fearful and suspicious. Some fear that international partners would ultimately like to see regime change and worry about the possibility of prosecution.

Many in power are therefore reluctant to compromise. The government does not want to give up its superior military standing against the opposition. It knows that upholding a power-sharing deal could prove unsustainable. Meanwhile, mounting international threats have put certain leaders on the defensive.

Where that leaves us

The calculus of South Sudan’s main belligerents is unlikely to change without a significantly new approach to peace or a shift in the military reality on the ground. The talks in Khartoum could lead to a surprise breakthrough, but unless the underlying logic changes, the risks on both sides will remain.

The current approach to making peace has been to largely limit negotiations to the warring parties. But this classic power-sharing arrangement has failed time after time, and for logical and understandable reasons.

It has long been time for a fresh approach that brings in new voices and representatives of the broader public.