FOREWORD BY THE HUMANITARIAN COORDINATOR

The women, men and children of South Sudan are ready for peace. That is the message I heard repeatedly when I travelled across the country in 2018. This call intensified with the recent signing of the Revitalized Agreement on the Resolution of the Conflict in South Sudan. There is now great expectation that the agreement will pave a way towards a peaceful and prosperous country.

Link to the report 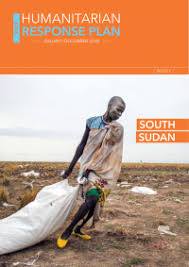 As we prepare to enter 2019, South Sudan remains in a serious humanitarian crisis due to the cumulative effects of years of conflict and violence against civilians, which have destroyed people’s livelihoods and forced 4.2 million people to flee their homes – nearly 2 million inside and nearly 2.2 million outside the country. The number of people who require humanitarian or protection assistance in 2019 remains high at seven million – the same as in 2018. Women and children continue to be the most affected. Some 2.2 million children are out of school and nearly 600,000 pregnant and lactating women will be acutely malnourished in 2019. During the first three months of the year, every other person is projected to be severely food insecure.

The coming year may begin to generate greater confidence among displaced people to return home. The scale and flow of such movements remain difficult to project. The Humanitarian Country Team is assessing likely scenarios and will be ready to provide the required support.
The 2019 Humanitarian Response Plan is well prioritized to make the best use of available resources to reach the people identified in the Humanitarian Needs Overview as most in need. We have refined our targeting and built on lessons learned from previous years to further increase efficiencies wherever possible. The Humanitarian Country Team will prioritize integrated response efforts that tackle people’s needs in priority areas holistically. This aims to keep affected communities at the centre of the response while maximizing synergies among humanitarian clusters for a more effective response. We plan to reduce reliance on air operations and increase the use of new tools like biometric registrations to carefully target assistance. As a result, the 2019 HRP is reduced in scope when compared to 2018, targeting 5.7 million people with an overall appeal of US$1.5 billion.

The year 2019 will offer more opportunities for development actors to address underlying causes of need. There is a growing commitment by all partners to provide humanitarian assistance while also reducing vulnerabilities and building people’s ability to cope. We will continue to work with all partners in the coming year to ensure that resilience and recovery programmes contribute to reducing the number of people in need of emergency relief.

The effective implementation of the plan will require a peaceful environment where humanitarian actors have consistent and unimpeded access and are not targeted by violence. I call on all the signatory parties to the peace agreement to stay the course to ensure its successful implementation. Committed local non-governmental organizations remain a central pillar of our response. Support from our donor partners, whose generosity in previous years is highly appreciated, will continue to be crucial in 2019.

The Humanitarian Response Plan is worth investing in. The humanitarian community in South Sudan has continued to innovate and improve its effectiveness. In 2018, we reached around 5 million people despite the challenges we faced. With the new year, we can achieve even more. And the people of South Sudan, full of hope and aspirations, deserve nothing less.

OVERVIEW OF THE CRISIS

The recently revitalized peace process promises to offer new opportunities in 2019 for South Sudan’s women, men and children.
However, the cumulative effects of years of conflict, violence and destroyed livelihoods have left more than 7 million people or about two thirds of the population in dire need of some form of humanitarian assistance and protection in 2019 – the same proportion as in 2018. While the situation is no longer escalating at a rapid speed, the country remains in the grip of a serious humanitarian crisis.

A legacy of conflict, violence and abuse

Five years of the most recent conflict has forced almost 4.2 million people to flee their homes in search of safety, nearly 2 million of them within and nearly 2.2 million outside the country.

While the intensity of conflict may have reduced recently, and clashes have been contained to certain regions, vulnerable people will continue to experience the impacts of the conflict through 2019. United Nations reports indicate that all parties to the conflict have repeatedly violated international humanitarian law and perpetrated serious human rights abuses, including gang rape, abductions, sexual slavery of women and girls, and recruitment of children, both girls and boys.
People affected by the conflict, including the 300,000 refugees in South Sudan, repeatedly identify security among their primary needs.

The conflict and associated economic decline have eroded the Government’s ability to provide consistent basic services to its people. Currently, one primary health centre serves an average of 50,000 people.

Only 40 per cent of nutrition treatment centres have access to safe water, a gap that puts more vulnerable people, particularly women, boys and girls, at risk of malnutrition and disease. Only about one in five childbirths involves a skilled health care worker and the maternal mortality ratio is estimated at 789 per 100,000 live births.

Every third school has been damaged, destroyed, occupied or closed since 2013, and more than 70 per cent of children who should be attending classes are not receiving an education.

Years of conflict, displacement and underdevelopment have limited people’s livelihood opportunities, marginalized women’s formal employment opportunities, and weakened families’ ability to cope with the protracted crisis and sudden shocks, like the death of a wage earner or loss of cattle. The livelihoods of 80 per cent of people are based on agricultural and pastoralist activities. Farmers, who are mostly women, and their families have been displaced from their fertile lands. Annual cereal production has reduced by 25 per cent from 2014 to 2017, leaving nearly 500,000 metric tons deficit for 2018. Over 80 per cent of the population lives below the absolute poverty line and half the population will be severely food insecure between January and March 2019, similar to the same period in 2018. The number of people in Integrated Food Security Phase Classification (IPC) Phase 5 is expected to nearly double from the same period in 2018.

About 1.5 million people live in areas facing high levels of access constraints – places where armed hostilities, violence against aid workers and assets, and other access impediments render humanitarian activities severely restricted, or in some cases impossible.17 In 2018, violence against humanitarian personnel and assets consistently accounted for over half of all reported incidents. More than 500 aid workers were relocated due to insecurity, disrupting the provision of lifesaving assistance and protection services to people in need for prolonged periods. Communities’ inability to access lifesaving support risks pushing women, men and children deeper into crisis. Many of the hardest to reach areas in Unity, Upper Nile and Western Bahr el Ghazal have alarming rates of food insecurity, malnutrition, and sexual and gender-based violence.