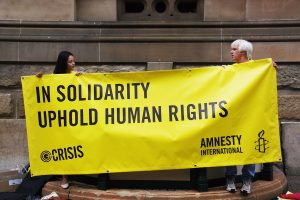 “The perpetrators of heinous crimes committed during the conflict should be held accountable and punished, not offered a slice of power,” said Joan Nyanyuki, Amnesty International’s director for East Africa, the Horn and the Great Lakes.

“South Sudan’s government has responded with investigation committees whose reports rarely see the light of day, and when they do, their findings largely ignore crimes committed by government forces,” said Nyanyuki in a report.

he authorities’ failure to prosecute and punish the perpetrators of crimes under international law, committed by both government and opposition armed groups necessitates a meaningful and effective alternative justice mechanism for the people of South Sudan,” he added.

The report said South Sudanese President Salva Kiir can confirm or reject judgments by the military courts, effectively giving him veto powers over what is supposed to be an independent judicial process.

The report recommends the establishment of the hybrid court as provided for by the revitalized peace agreement.

It also asks the government to conduct judicial and legal reform to improve the domestic justice system’s independent ability to address impunity for crimes committed in the context of the ongoing conflict.

on suspicion of plotting a coup, followed by a protracted civil war that claimed the lives of tens of thousands and forced 4 million people to flee their homes.

Before a 2018 peace deal, five years of fighting between the two leaders crippled the country, with millions displaced and almost 400,000 people died from violence and disease.

Attempt to reach South Sudan Government for the report is not fruitful as their phones are not going through.