Protesters barricade several streets in the capital a day after deadly crackdown by security forces. 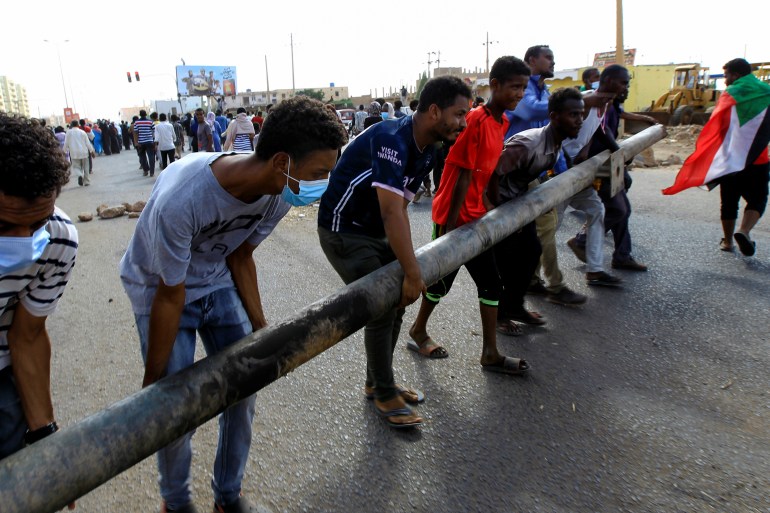 Anti-coup protesters have manned barricades in Sudan’s capital Khartoum, a day after a deadly crackdown on mass rallies, as a defiant civil disobedience campaign against the military takeover entered its seventh day.

Tens of thousands turned out across the country for Saturday’s demonstrations, marching against the army’s October 25 power grab, when top General Abdel Fattah al-Burhan dissolved the government, declared a state of emergency and detained Sudan’s civilian leadership.

The move sparked a chorus of international condemnation, with world powers demanding a swift return to civilian rule and calling for the military to show “restraint” against protesters.

At least three people were shot dead and more than 100 people wounded during Saturday’s demonstrations, according to medics, who reported those killed had bullet wounds in their head, chest or stomach. It takes the death toll since protests began to at least 11.

“No to military rule,” protesters carrying Sudanese flags chanted as they marched around the capital and other cities, as forces fired tear gas to break them up.

Demonstrations on Saturday rocked many cities across Sudan, including in the eastern states of Gedaref and Kassala, as well as in North Kordofan and White Nile.

As the night fell, many protests in Khartoum and the capital’s twin city of Omdurman thinned out. But on Sunday morning, protesters were back on the streets, again using rocks and tyres to block roads.

Soldiers from the army and the paramilitary Rapid Support Forces were seen on many streets in Khartoum and Omdurman.

Phone lines, which were largely down on Saturday, were back apart from intermittent disruptions. But internet access has remained cut off since the army’s takeover.

“Following yesterday’s attack by security forces using live ammunition, the resistance committee has advised protesters to stay in their neighbourhoods, barricade the roads leading to those neighbourhoods and residential areas and continue with the civil disobedience,” Morgan said.

Since August 2019, Sudan had been ruled by a joint civilian-military council, alongside Prime Minister Abdalla Hamdok’s government, as part of the now derailed transition to full civilian rule.

Hamdok and other top civilian leaders have been under military guard since the coup, either in detention or effective house arrest.

US President Joe Biden has called the coup a “grave setback”, while the African Union has suspended Sudan’s membership for the “unconstitutional” takeover.

The World Bank and the US froze aid, a move that will hit hard in a country already mired in a dire economic crisis.

On Sunday, the UN secretary-general urged Sudan’s generals to reverse their takeover of the country, saying they should “take heed” of Saturday’s protests.

“Time to go back to the legitimate constitutional arrangements,” Antonio Guterres said in a tweet.

The UN envoy for Sudan, Volker Perthes, said he met on Sunday with Hamdok.

“We discussed options for mediation and the way forward for Sudan. I will continue these efforts with other Sudanese stakeholders,” he said.