Protesters in Khartoum demand the expulsion of the UN, which has begun talks to try to solve Sudan’s political crisis. 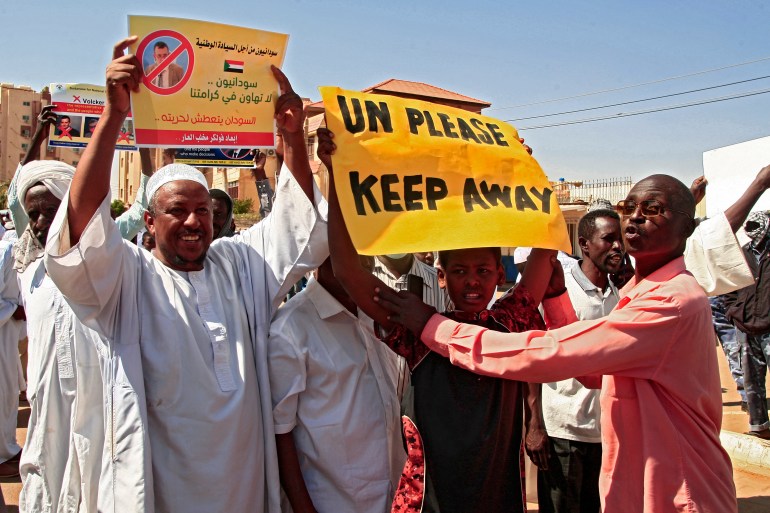 Sudanese pro-military demonstrators have taken to the streets of the capital, Khartoum, to protest against a UN attempting to resolve a political crisis that has been marred by a wave of bloody protests since a military coup in October.

An AFP news agency reporter said that thousands rallied on Wednesday outside the office of UNITAMS, the United Nations mission which launched talks with Sudanese factions this month.

They held up banners that read, “Down, down UN”, and others that urged UN Special Representative Volker Perthes to “Go back home”.

“We don’t want external intervention in our country,” protester Hamed al-Bashir told AFP outside the building.

On January 10, Perthes said the consultations aimed “to support the Sudanese to reach an agreement on a way out of the current crisis”. But he added that “the UN is not coming up with any project, draft or vision for a solution.”

On its Twitter account, UNITAMS said that the group of protesters was demanding the expulsion of the mission.

“We defend freedom of assembly & expression and offered to receive a delegation in our premises which they refused,” it added on Twitter.

Sudan has been in turmoil since military leader Abdel Fattah al-Burhan seized power on October 25, shattering the country’s fragile transition towards democracy. It put an end to a shaky power-sharing agreement between the military and civilian leaders that had been negotiated after a popular uprising deposed three-decade ruler Omar al-Bashir.

The Sovereign Council, formed by al-Burhan after the coup with himself as chairman, has welcomed the UN-led dialogue, as have the United States, United Kingdom, neighbouring Egypt, the United Arab Emirates and Saudi Arabia.

The Forces for Freedom and Change (FFC), Sudan’s main civilian bloc, has also said it would join consultations “to restore the democratic transition”.

In a Wednesday news conference, FFC leader Omar al-Degeir called on the international community to stand by “the Sudanese people to achieve its demands to reverse the coup”.

Stephanie Khoury, UNITAMS director of political affairs, said earlier: “Our role at this stage of consultations for a political process for #Sudan is to hear Sudanese stakeholders; ensure we actively listen to their views, document their visions & suggestions.”

Since the military takeover, pro-democracy demonstrations have shown no sign of abating despite a brutal crackdown by security forces. So far, at least 77 people have been killed, according to the Central Committee of Sudan Doctors – a group affiliated with the protests.

The latest victim was Ahmed Abdel Moneim, the medical association said on social media, who died on Wednesday after being shot in the head by security forces during a protest in the city of Omdurman last month.

Sudan’s authorities have repeatedly denied using live ammunition against demonstrators, and insist dozens of security personnel have been wounded during the protests.

A police general was reportedly stabbed to death during the unrest this month.

In the city of Wad Madani, south of Khartoum, sport clubs said they had suspended all activities until further notice “in tribute to the martyrs killed”. Shops and stores were also largely shuttered and streets were empty, according to witnesses.