Ethiopia denies Sudan’s claim, which it said was a ‘dangerous escalation’ in the border dispute between both sides. 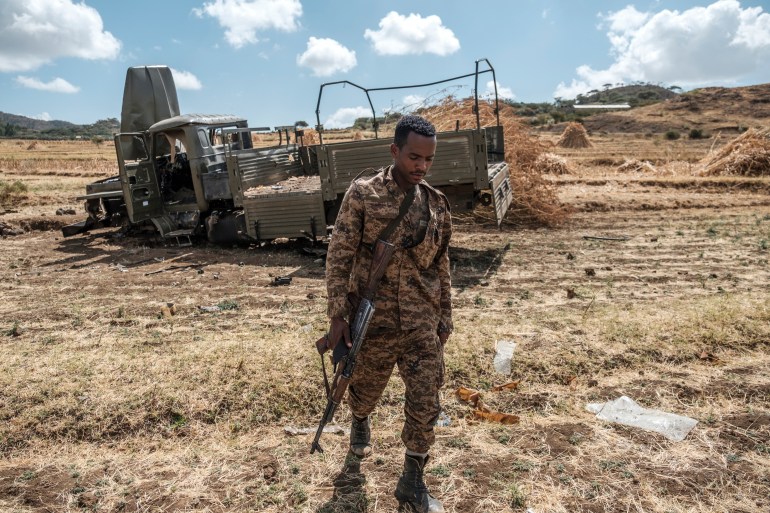 Bildetekst: The two sides held border talks last month, and Sudan declared its army had restored control over all border territory that had been taken over by Ethiopian farmers [File: Eduardo Soteras/AFP

Sudan says an Ethiopian military aircraft entered its airspace in “a dangerous escalation” to a border dispute that has seen deadly clashes in recent weeks.

“In a dangerous and unjustified escalation, an Ethiopian military aircraft penetrated the Sudanese-Ethiopian borders,” Sudan’s foreign ministry said in a statement on Wednesday, adding that the move “could have dangerous ramifications and cause more tension in the border region”.

The ministry also warned Ethiopia against repeating “such hostilities”.

An Ethiopian military spokesman, General Mohamed Tessema, told the AFP news agency he had no “tangible information” on Sudan’s allegations and the situation at the border was “normal” on Wednesday.

Separately, a Sudanese military helicopter, loaded with weapons and ammunition, crashed on Wednesday shortly after taking off from an airport in an eastern province that borders Ethiopia, according to the state-run Sudan News Agency (SUNA).

“A military helicopter crashed at Wad Zayed airport in Gedarif State … when the crew tried to land the plane shortly after taking off,” SUNA reported.

The report said the plane caught fire after hitting the ground, adding that “all three members of the crew survived”.

Tensions have been running high between the two countries over the Al-Fashaqa region, where Ethiopian farmers cultivate fertile land claimed by Sudan.

In December last year, Sudan accused Ethiopian “forces and militias” of ambushing its troops along the border, leaving four dead and more than 20 wounded.

On Tuesday, Addis Ababa claimed Sudanese forces were pushing further into the border region and warned that while it “gives priority to peace”, it has “its limit”.

In response, Sudan’s information minister and government spokesman Faisal Mohamed Saleh said Khartoum did not want war with Ethiopia but its forces would respond to any aggression.

Khartoum also accused Ethiopian armed men of killing five women and a child on Monday in the area, calling it a “brutal aggression”.

The two sides held border talks last month, and Sudan declared its army had restored control over all border territory that had been taken over by Ethiopian farmers.

The border dispute comes at a sensitive time between the two countries, who along with Egypt have recently hit another impasse in talks over the massive Grand Ethiopian Renaissance Dam on the Blue Nile River.