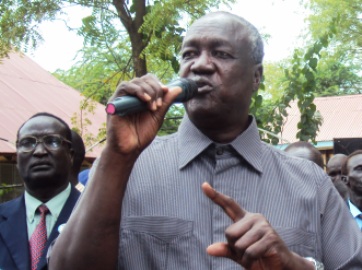 March 21, 2022 (JUBA) – A senior member of South Sudan’s ruling party (SPLM) has dismissed allegations that he has resigned from his presidential advisory position, saying he remains committed to President Salva Kiir’s government.

Kuol Manyang Juuk made the remarks in a statement to explain the context in which he has been speaking on the SPLM leadership before the signing of the 2005 peace agreement and his desire to go live private life.

“It was the year 2015 when I tendered in resignation in writing to H.E the president who rejected it. I again more than once expressed to him my desire to resign from government and go to the farm. His response was that insecurity prevailing in the country will not make me succeed and can be a threat to my life and therefore would not let me go and that once the situation improves, he will let me go”, Kuol publicly wrote on Sunday.

He wondered why his explanation was being misinterpreted by distractors.

“My reasons for leaving the government were not political. It was my desire before the CPA [Comprehensive Peace Agreement] was signed. I had on many occasions expressed to both the late comrade Dr. John Garang de Mabior and comrade Salva Kiir Mayardit my desire not to work in the government, but go to the private sector specifically agriculture,” said Kuol.

In an interview with Eye Radio, Kuol said it was time for citizens to express their political views without fear of arrest or intimidation.

“My statements to the media are facts we all know as citizens of South Sudan. These crises were there within southern Sudanese that was why there was many liberations movement during the 17 years long of war of liberation struggle from 1955 to 1972.  It is the same attitude towards us that resulted in the breaking up of the southern Sudan government in 1983. It is the same attitude that causes war amongst us in the years 2013 and 2016,” wrote Kuol.

He added, “It is the same attitude where we are now unable to implement the revitalized agreement on the resolution of the conflict in South Sudan”.

The former army chief of general staff cautioned those peddling “lies” about him allegedly with intentions of winning the South Sudanese leader’s favour.

“Please never take me to be opposed to comrade Salva Kiir Mayardit whom the people of South Sudan elected to be the president and was elected by the SPLM National Congress. I am advising those who are near President Kiir not to tell lies to H.E about me,” stressed Kuol.

“1’m equally telling those who want me to publicly announce my opposition to President Kiir that I am not opposed to him and will never,” he added.

Kuol said he was ready to quit his advisory role and retire into private life.

“Those who want my position of presidential adviser can go to the president and I will be happy to go home and stay with my family and join the private sector of business”, he noted.

The senior presidential advisor’s statement comes less than a month after Daniel Awet, another leading member of the country’s ruling party asked Kiir to step down in order to preserve the legacy of the movement.