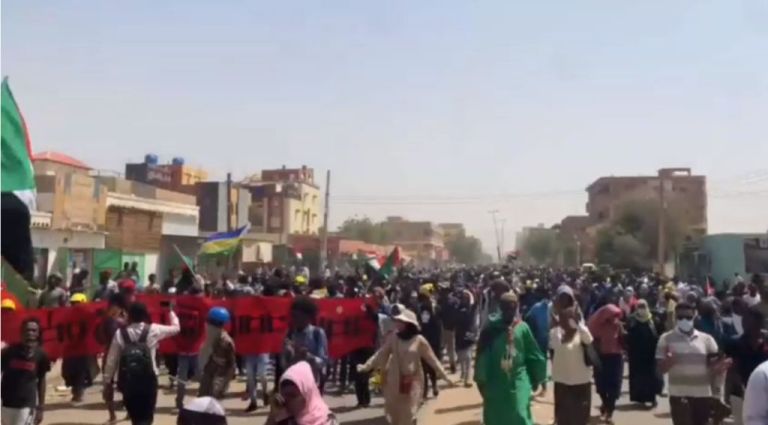 March 24, 2022 (KHARTOUM) – A protester was shot dead and dozens wounded on Thursday in fresh protests across the country rejecting the military coup that isolated the country against and aggravated the economic crisis in Sudan.

Following a two-day blockade of the Sudanese capital streets, thousands of protesters gathered in Khartoum city before heading to the Republican Palace chanting pro-democracy slogans.

In Khartoum, the security forces used excessive force to disperse the protesters and prevent them from reaching the headquarters of the military-led Sovereign Council. Also, they arrested several protesters and took them to an unknown location.

While in Madani, capital of the Al Jazirah state, in central Sudan, a protester was killed by a cartridge weapon that the security forces use more and more to disperse the protests.

The independent medical group Central Committee of Sudanese Doctors (CCSD) said he was hit in the chest area, between the neck and the abdomen by a cartridge weapon at close range.

The death toll from the bloody crackdown on anti-coup nationwide protests rose to 90 on Thursday, March 24, 2022.

“The coup (leaders) continue to use lethal violence against peaceful protesters who remain committed to non-violence, which has proven its strength against bullets and the security arsenal,” said the CCSD.

Despite the excessive use of violence, the military leaders have failed to quell the protest movement that has begun with the coup of October 25, 2021.

This failure recently opened the door for rumours about another coup to end the “constitutional vacuum” and to appoint a government that would impose martial law ending protests.

In an opinion published in the Assayha newspaper on Thursday, Abdallah Mursal, a former minister in the al-Bashir regime called on al-Burhan and his deputy Hemetti to take a series of drastic measures to prevent attempts to overthrow their rule.